Recently I had the pleasure of attending a pre-screening of Paul, Apostle of Christ. Since the movie comes out in a month (March 23rd) I thought I’d give a review and some points to ponder.

{Edit- I actually went back to see the movie on April 3rd and really enjoyed seeing it a second time!}

Movie reviews aren’t what I normally do, but hey- they gave the opportunity to review it before it was technically done so I feel like I should! More importantly, I think this movie is worth talking about because it so well matches the vision of this site- Leave the World Better Than You Found It – and that Love is the only way to do that. In other words, if you want to make an impact on people here before you die: Love is the only answer.

You may also be interested in the Heart of the Story Featurette: https://youtu.be/-EbrjbUUWCI

Background – the Time of Paul

Though the movie centers around Paul (portrayed by the very intense James Faulkner), the central character is Luke (played by Jim Caviezel who played Jesus in the Passion of the Christ).

Unlike many other films in this genre, this movie sticks to the facts and the history with very minimal speculation or insertion of distracting events (obviously, there are a few).

The movie takes place in Rome, sometime in the late 60s AD/CE. The Way (hidden early Christians) have been accused of starting fires all over Rome (which the kindly folks in Rome know was Nero but… they play along.) Paul has been imprisoned for inciting said riots and this is going to be the end of his life. Luke arrives and takes the risk of seeing Paul in prison, being convinced by local leaders of the hidden movement. A Roman guard is bribed, and Luke is able to visit several times and begin writing the accounts that will be known as the Acts of the Apostles. The intention is to give the people, who have united behind Paul, something to reference… the fear is that the Way will die off without words of wisdom from Paul. They know Paul is at the end and fear that it may be the end of Christianity itself. It’s easy for us to look back and think that is just crazy talk… but it was quite natural at the time, I think.

Meanwhile- there are essentially four people/groups having a crisis of faith, all of which end up encountering Paul even though he is in prison. The first is Luke himself who is starting to wonder just why he should bother with these Romans at all. Perhaps the most profound of all of them, Luke learns from Paul what Faith is… and more importantly what Love is. I should say, what it REALLY is.
The second is Priscilla and Aquilla, who have been leading the hidden Christians… Should they stay or go? There is a disagreement among them; both led by a will to do what is best for the people and in fact the world…

The third is that of a group of younger people in the gathering that feel that they should take up arms against Nero’s barbarism and free Paul from prison by force. You can feel the tension as they grab swords- you will them to stop, knowing full well that this is the early Church and not all is as tempered and well-intentioned as it has been at times since…
Finally- you have the Roman officer charged with the administration of the prison- he prays to his gods for the healing of his daughter, who is dying. All the doctors who see her tell him the same thing: Pray to the gods and hopefully you’ll find one eventually willing to save her. His wife believes that their daughter is dying because he has allowed Luke to write down Paul’s last words. Now remember that Luke is a physician… Paul urges the administrator to let Luke heal his daughter… the rest is for you to find out when you go see the movie.

I need to start this section with my expectations. And I’m sure many of you are right here with me: “Christian” movies tend to be awful (be honest- you don’t put God’s Not Dead in the DVD Player on a Saturday when no one else is around). “Christian-themed” large productions tend to be soft in message, long on drama and disappointing. I’m sorry- but I have to put Passion of the Christ in this bucket. There are exceptions, of course but in my mind the bar is set pretty low.

Because I’m being honest (as always)- this isn’t going to win any Academy awards. The acting is at times awkward and overdone, at times muted. Faulkner is nearly flawless but at times hard to become attached to. Caviezel is good overall, though at times seems lost somehow. Joanne Whalley (if she looks familiar, think Willow… once married to Val Kilmer) is unfortunately not always convincing, perhaps a little contrived. Overall, she pull it off. Unfortunately for me I was seeing a version which had only early ADR (Automated Dialog Replacement)- I’m assured much of Olivier Martinez’s dialogue will be re-done which the audience agreed would be a good thing. This will be great to match his performance- the organizers told us that he gave the director a choice, either act well or give good dialogue. They were wise to choose the former- his performance was awesome- passionate and Shakespearean. As a movie for entertainment I would say this movie may disappoint some. But that’s all for the bad news.

HOWEVER- as an inspiring work of art… this movie was simply amazing and I can’t wait to see it’s completed form. The story is so intense it is at times hard to believe it’s true. It is well written and well directed. There is a scene of early Christians taking the Lord’s Supper that I dare you to try and keep a dry eye. Given my criteria above- I would say this film is far more enjoyable to sit thru than any in the genre I have seen in decades. In all, this is not a ‘B’ movie. It flows together, is edited and composed well. I think people will enjoy it.

But mostly I think you should go see this movie to understand in a new way what Faith really is. What Love really is. And who Christ really is. Not was… is. You won’t be preached at- but you will see how lives were changed. You won’t be convicted but you will see how people were willing to risk death because they had been transformed by the Gospel. No cheesy feel good moments- in fact I would say this film is devoid of any feel good moments- you don’t leave feeling like you have been validated. You feel that you have it easy in the modern age.

There are a few things I really adored about the film beyond what I’ve mentioned because there are key takeaways.

Letting someone in when they are trying to make a turn on the freeway is kindness. I'm talking about Love. Love is the Only Answer. #paulmovie #leaveitbetter Click To Tweet

Let’s take this a step further. Take two minutes and listen/watch this.

Now- Is there any way to debate Paul on this? Can anything contrary be said about this passage? If so, I have never heard it. It is as true now as it was 2000 years ago, and even before that. If we have any hope of impacting the world- we need to remember Paul’s words!

So there you have it. Go see Paul: Apostle of Christ on March 23rd – or find a group going in advance on the 21st– there are a lot of those forming!

Also- feel free to share this review! You can select quotables and tweet them with #paulmovie and #leaveitbetter to @djeshelman.

A big thanks to Affirm Films for inviting me to the early screening and for providing the cool moving pictures and media for this post. Find out more at http://www.paulmovie.com 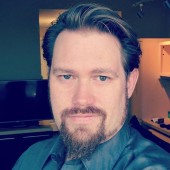 What To Do When Your Spouse Doesn’t Support You

How to Finally Finish All of Those Projects You’ve Started